Tiling complete it was time to fit the shower and sink. While the plumbers fitted the shower I got on with the sink.

The sink is made from a timber kitchen countertop which was cut to size by my kitchen fitter – John Colleran Kitchens.  All the wall tiles and the sink & chrome wastewater trap supplied by Tubs & Tiles in Ennis  and tap from A&R Supplies in Limerick and finished and assembled and fitted by yours truly.

A few coats of hardwearing varnish on the timber and our custom sink is complete. Just have to get a few tiles for the splashback and sort a mirror and light and we are done.

With the electricity working we were able to get the underfloor heating system commissioned.

Ashgrove Renewables (www.ashgrove.ie) from Cork came to finish off the system fitting the Air to Water heating unit, storage tank and connecting it all up to the underfloor pipework. The Mitsubishi Air to Water heating system will provide all our heating and hot water requirements.

A few days later they connected and tested the kickspace heaters in the bathrooms & bedrooms upstairs.

With all heating systems installed we just have to get the plumber to connect the water for our hot water system and we are complete.

Finally finished the last few courses of the glass block wall for the downstairs bathroom.

It took a few days to complete. I set the first course and levelled them which was a bit tricky on the sloping concrete floor. Once the first course had cured I laid 3 or 4 courses at a time and clamped a level and timber to the end column of blocks to help keep them in alignment.

All blocks, spacers, grout and steel reinforcing bars were sourced from the Glass Block Co. in Lucan, Dublin (www.glassblockco.ie). They had a great selection, competitive prices and very helpful with tips on installation for a rookie like me!!

After almost a month wait .. we finally have power at the house.

Our electrician Kieran Brennan had submitted the RECI cert to the ESB Networks and it was all pretty straightforward …. to that point.

However dealing with ESB Networks was a complete fiasco.  It is hard to believe the arrogance, stubborness and sheer lack of professionalism in this organisation.  From talking to others it seems that my experience was far from unusual and the reputation is well deserved.

We were given a date for connection, nobody turned up on that date.  After several phonecalls we got a crew to come to site a few days later who immediately left as they said the pipework wasn’t in the exact position required.  Within 10 minutes of their departure the issue was addressed (in spite of the fact we had not been alerted to the issue) but it took another week to get the crew back to finally perform the connection.

On almost all occasions it was painful to deal with ESB Networks with their failure to respond and a somewhat “wild-west” attitude to scheduling where nothing is ever disclosed and crews are roaming the countryside on-call to wherever the supervisor decides to send them (so you don’t want to anger the supervisor – a lot of tongue-biting is required).

You’d know there was a monopoly involved – in the lack of customer care or focus.

In any case we have power, paid a small fortune for a connection that was completed in an hour and hope to never have to deal with ESB Networks again.

All the rainwater and sewage pipework has been connected into the external tanks.

Rainwater from the main and side roof areas is going to a tank in the front lawn .. about 3750 litres in a large concrete holding tank with a pump to return the water into the house for toilets etc.  With extra treatment it could also be used for drinking water but no plans for that at present.

The wastewater and sewage goes to a P60 sewage system in the garden.  The percolation area has been cleared and pipework laid.  By tomorrow it should all be covered over and we can begin to bury it all underground and prepare the levels.

Finally, with the floor in the living room fully polished it is time to start putting in the fitted appliances .. namely the stove. 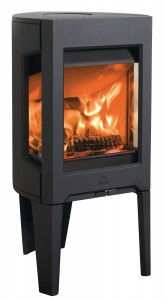 For now we’ll put it in situ but won’t fit the flue and get it working for a few weeks.  For now we can simply enjoy the reflection on the shiny new floor.

With the painting of the basecoat & first finish coat complete we can now get the ground floor polished. Concrete Concepts are back on site to carry out the next stage of polishing on the floors.

It is going to take a few days to remove the top dusty layer from all the floors, grind out all the small scratches and bring up the full floor finish. A special sealant is then applied to the floor which, once dried, will be polished to a shiny platinum finish.

So .. as we approach then end of February and nearly six months from kick off we are in the home strait.

This week the electrical second-fix is underway and should be completed by Thursday.  All our sockets and switches are ready to be installed.  We have chosen a screwless cover plate in stainless steel for the main sockets and switches.  They’re called click definity – for more information see here – http://www.clickdefinity.com/the-definity-range.php.

On the outside the finish coat of mineral render is being applied as part of the Aquapanel wall system.  Hopefully the weather will stay above freezing & dry enough for the next few days to allow Denis & Co. to get the work done.

The exterior render will get a coat of paint in the summer months but this will get us through the rest of the spring and allow us to take down the last of the scaffolding and get the ground works underway next week for the sewage and wastewater treatment.

The plasterwork is more-or-less dry so we can lash on the first coats of paint.  We’re going for WHITE (yes, very safe and original) for the finish coat throughout the house.  Once we’ve settled into the house we might introduce a few other shades when we get a feel for the decor and spaces.

We sourced the paint from a Limerick supplier (Limerick Paint Supplies) and are using a Macphersons for the base coat and Johnstones Durable Matt Acrylic for the finish coats as it is scratch resistant and can be wiped down.

The initial basecoat and first finish coat are applied with a spray gun and we will wait until the floor grinding & polishing is complete before applying the final coat as there will be lots of dust created.